Listening is directing attention to what is heard, gathering
meaning, interpreting, and deciding on action. 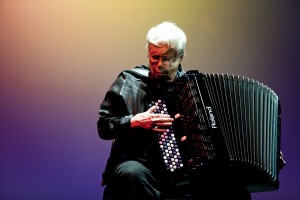 Pauline Oliveros, composer, performer, and humanitarian, is an important pioneer in American music. Acclaimed internationally, for four decades she has explored sound -- forging new ground for herself and others.

Through improvisation, electronic music, ritual, teaching, and meditation she has created a body of work with such breadth of vision that it profoundly affects those who experience it and eludes many who try to write about it. "On some level, music, sound consciousness, and religion are all one, and she would seem to be very close to that level," stated music critic John Rockwell. Oliveros has been honored with awards, grants, and concerts internationally. Whether performing at the John F. Kennedy Center in Washington D.C., in an underground cavern, or in the studios of a West German radio station, Oliveros' commitment to interaction with the moment is unchanged. She can make the sound of a sweeping siren into another instrument of the ensemble.

Pauline Oliveros has built a loyal following through her concerts, recordings, publications, and musical compositions that she has written for soloists and ensembles in music, dance, theater, and inter-arts companies. She has also provided leadership within the music community from her early years as the first director of the San Francisco Tape Music Center  (now known as the Center for Contemporary Music at Mills College), director of the Center for Music Experiment during her 14-year tenure as professor of music at the University of California at San Diego to acting in an advisory capacity for organizations such as The National Endowment for the Arts, New York State Council for the Arts and many private foundations. She was the recipient of four Honorary Doctorates and among her many recent awards were the William Schuman Award for Lifetime Achievement at Columbia University in New York, NY,  the Giga-Hertz-Award for Lifetime Achievement in Electronic Music from ZKM, Center for Art and Media in Karlsruhe, Germany, and The John Cage Award from the Foundation of Contemporary Arts in New York, NY. Oliveros was a Distinguished Research Professor of Music at Rensselaer Polytechnic Institute in Troy, NY, and Darius Milhaud Artist-in-Residence at Mills College in Oakland, CA. Oliveros has been vocal about representing the needs of individual artists, about the need for diversity and experimentation in the arts, and promoting cooperation and goodwill among people.

She founded Deep Listening ®, which came from her childhood fascination with sounds and from her works in concert music with composition, improvisation, and electro-acoustics.  She described Deep Listening as a way of listening in every possible way to everything possible to hear no matter what you are doing. Such intense listening includes the sounds of daily life, of nature, of one's own thoughts as well as musical sounds.

Through Deep Listening Pieces and earlier Sonic Meditations, Oliveros introduced the concept of incorporating all environmental sounds into musical performance. To make a pleasurable experience of this requires focused concentration, skilled musicianship, and strong improvisational skills, which are the hallmarks of Oliveros' form. In performance, Oliveros uses an accordion that has been re-tuned in two different systems of her just intonation in addition to electronics to alter the sound of the accordion and to explore the individual characteristics of each room.

Selected writings by and about Pauline Oliveros