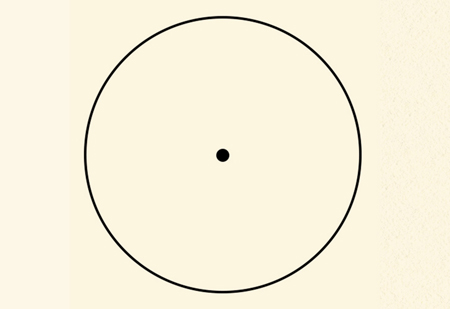 A Year of Deep Listening is a 365-day celebration of the legacy of Pauline Oliveros, and what would have been her 90th birthday. The Center for Deep Listening at Rensselaer is publishing one text score per day—online and across social media platforms—beginning on Oliveros’ 90th birthday: May 30, 2022.

The scores have been offered by the community of listeners who have been touched by the philosophy and practice of Deep Listening. In addition to marking and celebrating Oliveros’ 90th birthday, this project is an attempt to explore what listening can make possible in the context of our current moment…

We are all ears! 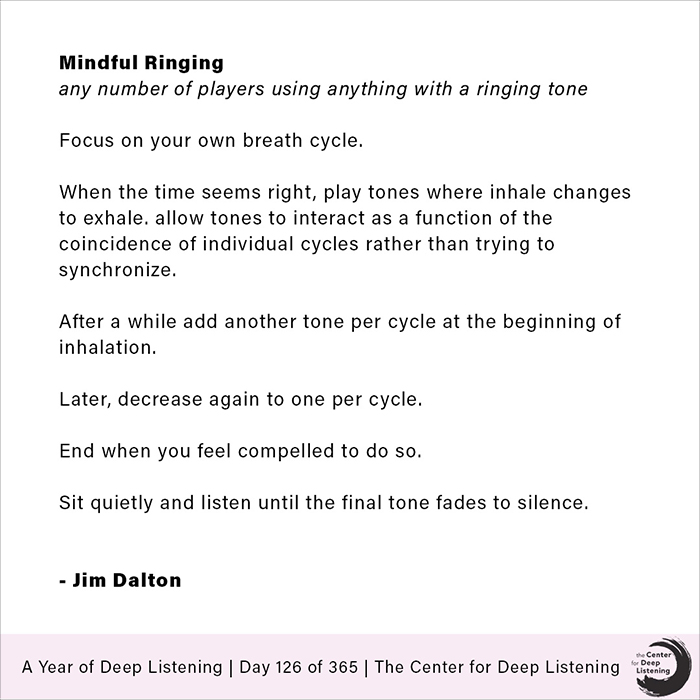 American composer Jim Dalton is a professor of music theory at the Boston Conservatory at Berklee. His works are performed throughout the US, Canada, and in Europe, including venues such as Musique Nouvelles, Lunel, France; the Kansas Symposium of New Music; Sound: Scotland’s Festival of New Music; and Akademie der Tonkunst (Darmstadt, Germany). He has recent premieres by Aaron Larget-Caplan, Carson Cooman, Sharan Leventhal, Stephen Altoft, Transient Canvas, and Scottish Voices. Dalton is a frequent guest lecturer in microtonality/just intonation. 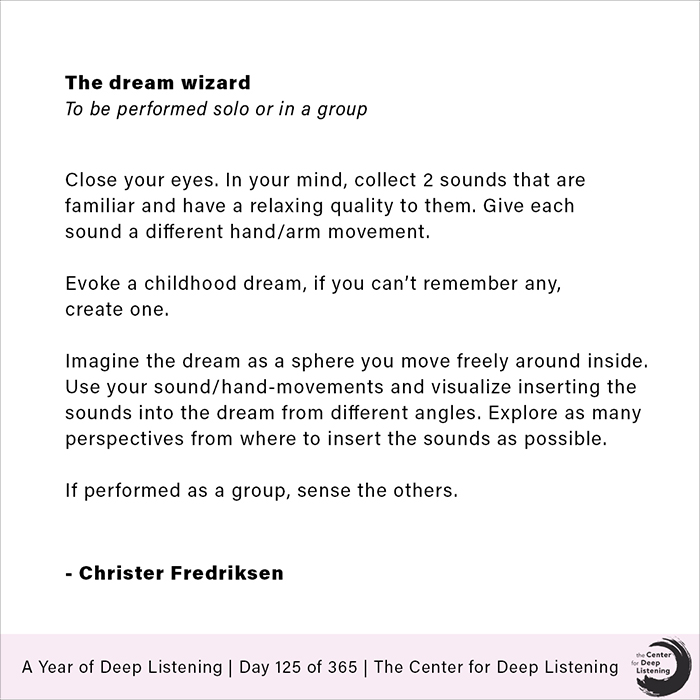 the dream wizard, by christer fredriksen

Christer Fredriksen is an ambient jazz guitarist and composer with a distinctive sound and a unique ability to tell stories through his music. Christer was born 1972 in Kristiansand, Norway and fell in love with the woods and the electric guitar at the age of 13. He studied music at the Agder University, finishing his Masters Degree with a Performing Masters in Afro-American musics. Christer holds a teaching position at a local secondary school. 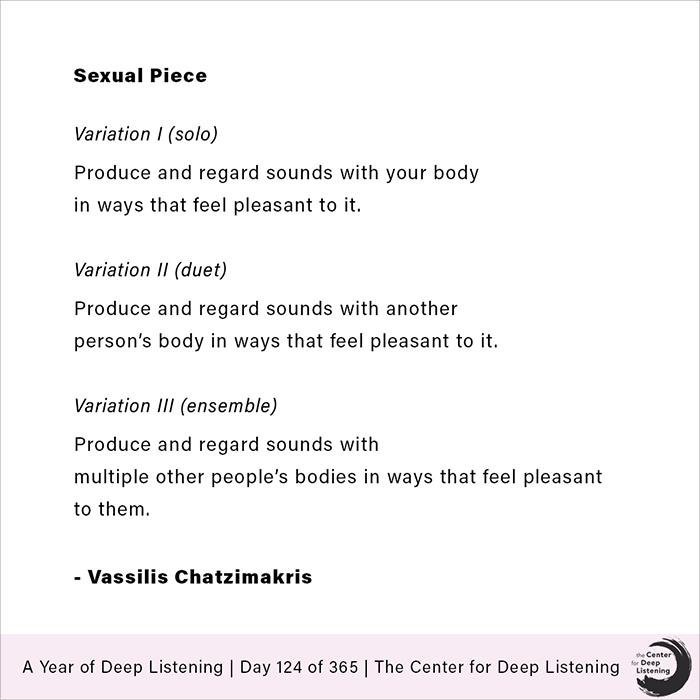 From “Mindful Sounds,” a collection of scores inspired by Pauline Oliveros’ concept of Deep Listening.

I am a composer, performer and sound artist, currently completing my PhD in Composition at Bath Spa University. My compositions have been performed by ensembles such as 6daEXIt, Apartment House, Plus Minus and In(s)core in concerts, festivals and multimedia performances all around the world. My compositional practice is centered around interfacial scores, i.e. scores that allow for alternative interpretations using substantially different performing means, representing thus an interface between different media.e now. https://www.facebook.com/vassilischatzimakriscomposer 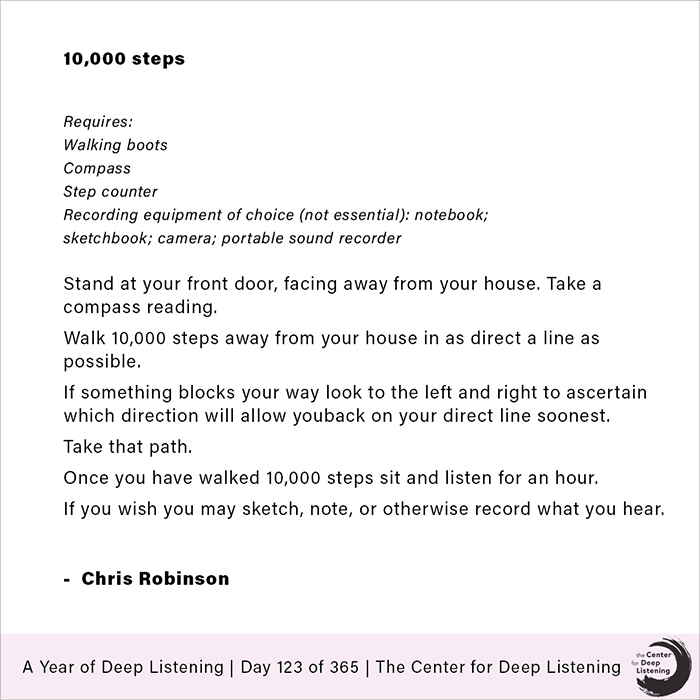 An artist, writer, and musician, I use indeterminate and aleatory methods to produce interdisciplinary works. My artists books have been exhibited in the UK, USA, and Europe, and are in several UK collections, including at Tate Britain, University College London, and the BALTIC in Gateshead. I have self-released several albums of experimental music as The Erratic, which can be found at: www.theerratic.bandcamp.comme now. www.wordsofdeadpoets.co.uk 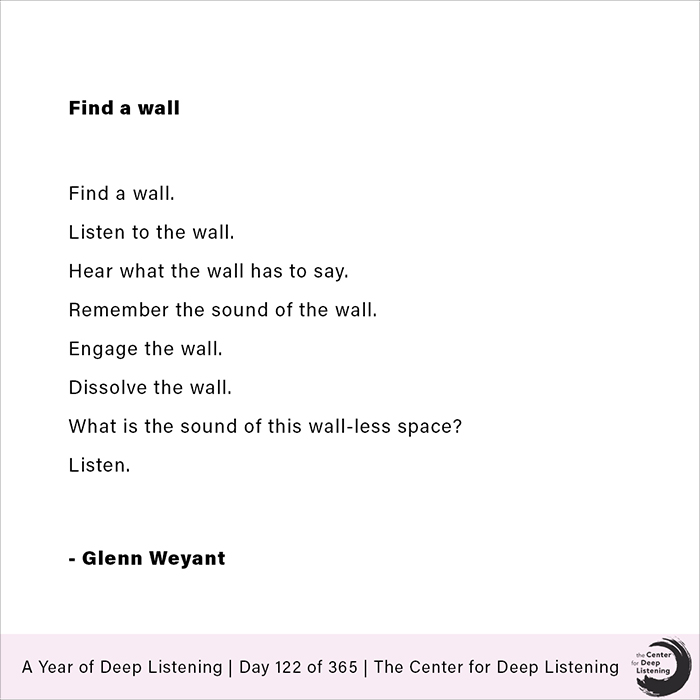 Find a wall, by Glenn Weyant 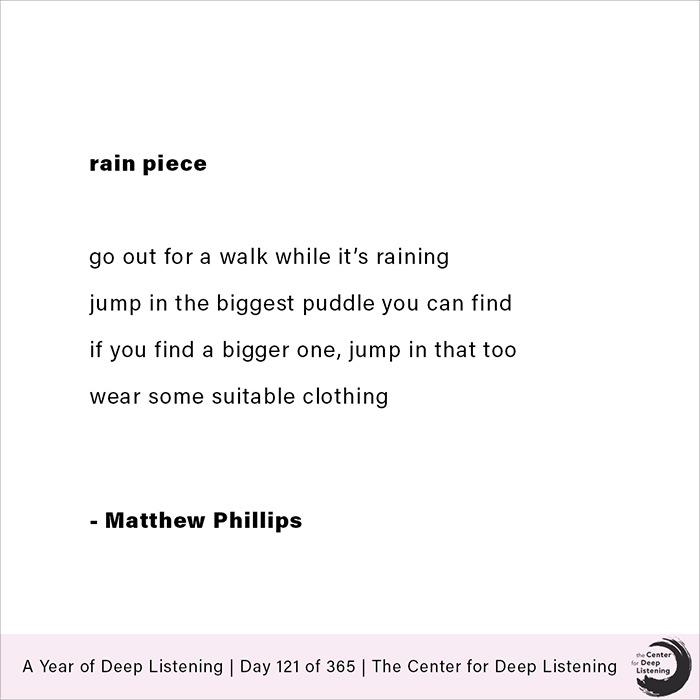 Matt Phillips (b.1999) is a cellist, composer, and improviser from Liverpool, UK. 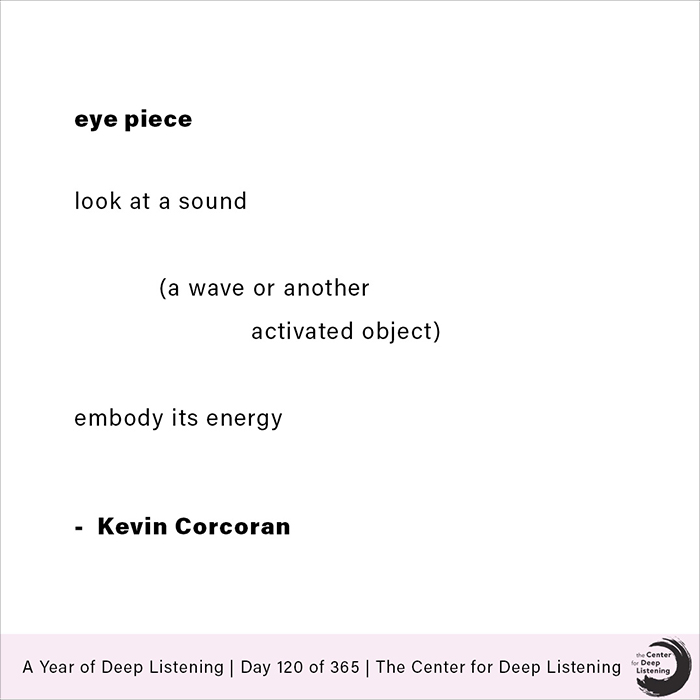 Kevin Corcoran works with percussion and field recordings with an open interest in sound as medium as it moves through contexts of music, art, communication and place. Based in the California Bay Area, he improvises, arranges sounding objects, and collaborates across disciplines and borders. 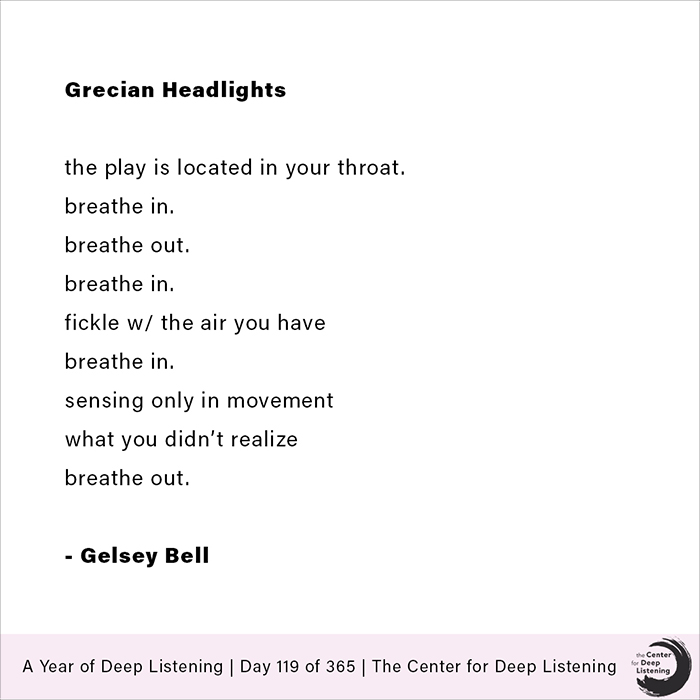 Gelsey Bell is a Brooklyn-based singer, songwriter, and scholar. She is a core member of thingNY, Varispeed, and the Chutneys. She is currently a resident artist at the HERE Arts Center, where she is developing the opera mɔːnɪŋ, and is looking forward to a music residency at Pioneer Works in 2022. She has received awards from Opera America and the Foundation for Contemporary Arts, and recent residencies at Mount Tremper Arts and the Kinosaki Arts Center in Japan. Her recent works include Cairns, shuffleyamamba: Yamamba as a Bear, Meander, SubtacTTTTTTTTT, and Skylighght. 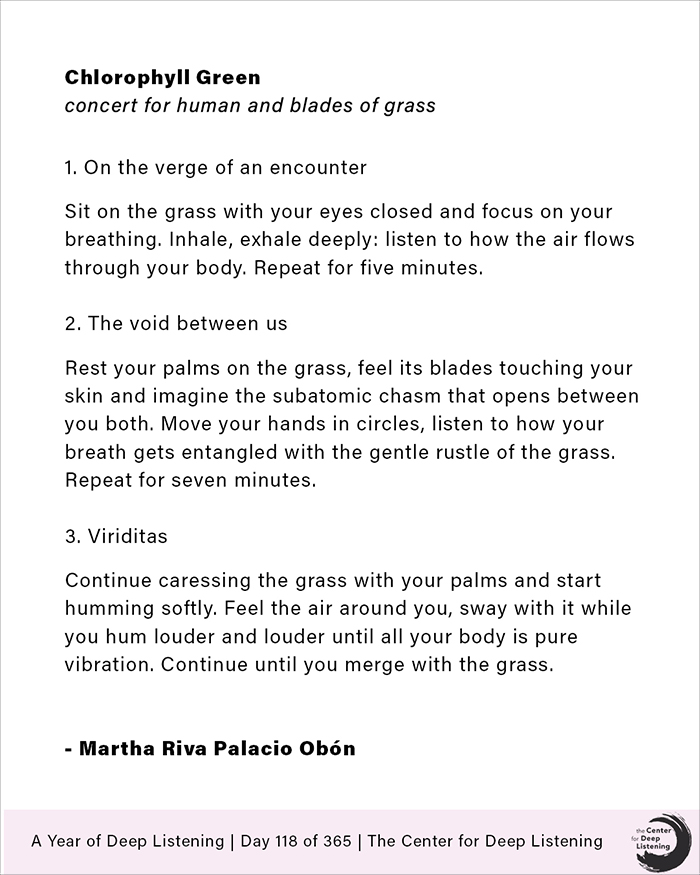 This piece is inspired in Hildegard’s von Bingen concept of Viriditas, greening green. It may be performed with or without human public. Blood, sap, we breathe…

Mexican author and sound artist. Martha Riva Palacio Obon studied psychology and visual arts and is part of the science and arts collective Cúmulo de Tesla. In 2020 she was granted the Otherwise fellowship with her interdisciplinary project Following crickets around the house. Her sound essays have been presented in spaces such as Tsonami, Radiophrenia, Sur Aural and the WFAE conferences among others. Her short story Biography of Algae has been published in Strange Horizons. 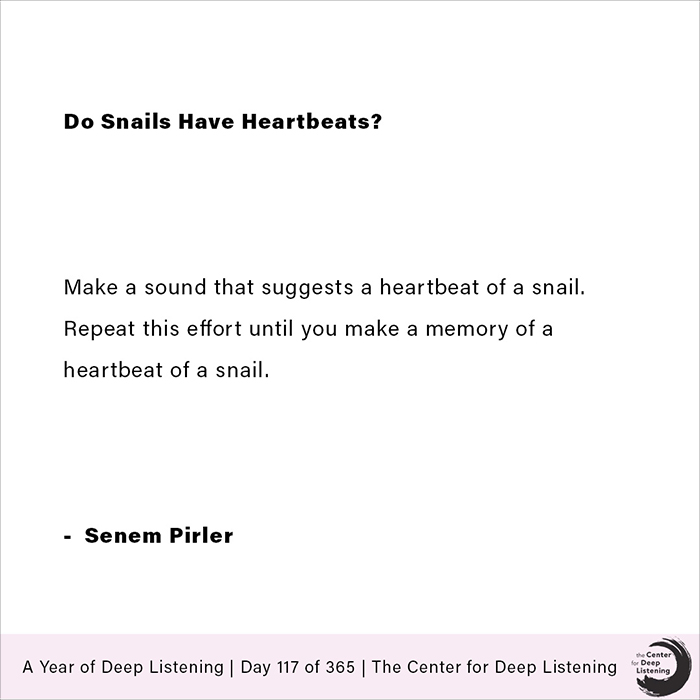 do snails have heartbeats?, by senem pirler

Senem Pirler (she/her) is a sound and intermedia artist, and educator based in Troy/Brooklyn, NY. Pirler’s interdisciplinary work crosses over into sound engineering, sound art, performance, video art, movement, and installation. Born in Turkey, she studied classical piano at Hacettepe State Conservatory and sound engineering & design at Istanbul Technical University (MIAM). She developed her artistry working as a composer and recording engineer before moving to the U.S. in 2010 to study Music Technology on a Fulbright Fellowship. Pirler earned her M.M. in Music Technology the Stephen F. Temmer Tonmeister Honors Track from NYU Steinhardt, and her Ph.D. in Electronic Arts from Rensselaer Polytechnic Institute.